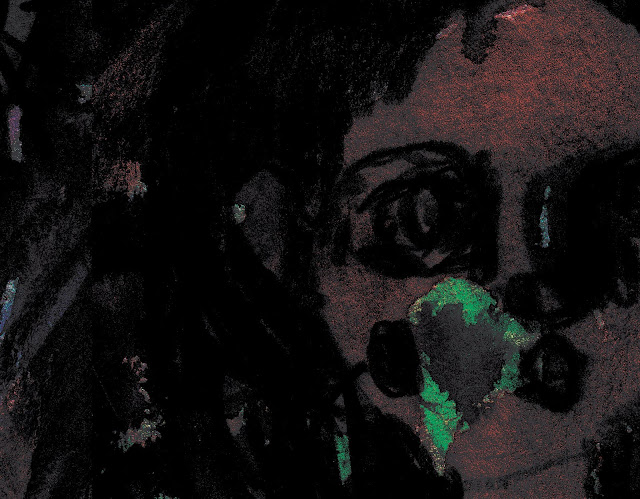 thanks to frédéric blondy and
rendez-vous contemporains de saint-merry 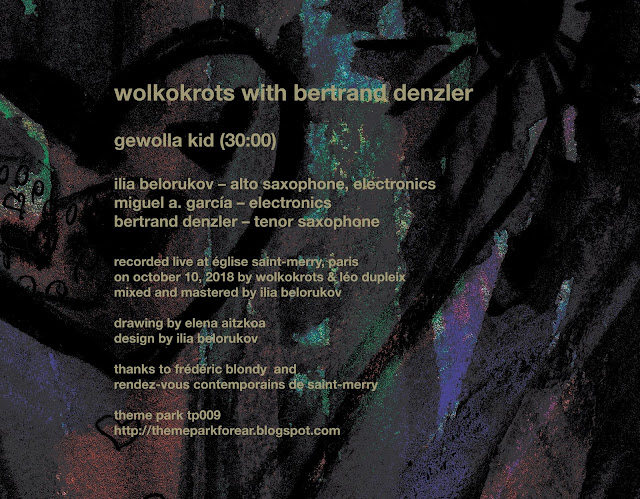 A file exchange collaboration with Julien Skrobek, he sent me the file a few years back, but not until recently I finally workout something can go along with his parts. Release without permission from Julien Skrobek, who has been lost contact for a few years.

Word(s):
Vital Weekly
Label boss Goh Lee Kwang exchanged some sound files with Julien Skrobeck a few years ago and recently set himself to work on it, adding some music of his own. This is released without Skrobeck's permission, as apparently they lost contact, which may account for the title of the piece. It's not on the cover, or on the website, what they play here, but my best guess would this is all to do with electronic sound and/or some form of laptop processing. It's a kind of organ like sound, but then more digital, as well as sustaining and moving at the same time. I have a feeling that this work has been made on the spot rather than through some meticulous compositional process. Quite enjoyable but not an excellent release, also if not a bit long.
- Frans De Waard -

art and photography by Anu Tuominen

Truly free adaptation of an Edgar Allan Poe novel "the fall of the house of Usher", the piece was lately recomposed.

Word(s):
Vital Weekly
Theme Park For Ear, Goh Lee Kwang's imprint for more spontaneous releases, improvised music and whatever else impromptu from the world of electronic music. The first is by a quartet of busy bees: Ilia Belorukov (alto-saxophone, objects, ipod & mini-amp), Pedro Chambel (sinewaves & noises), Bruno Duplant (organ & concept), Kurt Liedwart (analog synthesizer & electronics). "Truly free adaption of an Edgar Allan Poe novel, 'the fall of the house of Usher', the piece was lately recomposed", it says on the cover. I have read the story (albeit ages ago), but had I not read this on the cover, I think I would not have gotten this out of the music. It seems that these four players set out to play concentrated bits of a longer piece, with tiny gaps in between. All of this is course highly carefully done, with slow developments, small changes, deep sine waves and minimalist moves. It's a great music for sure, but I didn't get the supposed narrative aspect of it. Also I thought it was a bit too long at forty-nine minutes for the amount of variation it had to offer.
- Frans De Waard -

recorded and mixed in Berlin, summer 2013

Word(s):
Vital Weekly
Thema Park is a sub division from Herbal International. One Rolando Hernández plays guitar and voice and Bryan Eubanks plays oscillators. They recorded this seventy-five minute piece last summer in Berlin. This is a very quiet work. I opened it up in an audio-editor, normalized it and even then it's very much inaudible. I am not sure why this is. When it's so quiet it's likely others will do this too, so why not make the whole thing louder? One long piece, all chopped up in smaller section, but cut as one piece on the CDR. There is lots of careful strumming and scraping, a bit of plucking the strings and all along there is a bit of oscillators neatly humming somewhere. This is quite an enjoyable release, but perhaps a very long one, although I think the longitude is part of the idea behind this. It seems to me music without commitment, without much thought, but rather a steady stream of different sounds.
- Frans De Waard -

1. Alekhine and Junge at Prague (After Jas H Duke)

2. For Sam Pettigrew, even though he pissed on me

All composition by Rishin Singh.

Word(s):
Vital Weekly
Bryan Eubanks is the performer of the first piece composed by Rishin Singh called "Alekhine and Junge at Prague (After Jas H Duke)". I assume he still plays oscillators here, making a short sound, of variable lengths, and silence inbetween, lots of silence actually. Maybe this is supposed to be some sort of zen meditation thing, but it somehow eluded me. Maybe we should see the score? Probably also conceptual is "For Sam Pettigrew, even though he pissed on me", which is 'performed Sam Pettigrew, Bermagui - Yuin Country. Recorded by Sam Pettigrew & Rishin Singh 2012'. Here we have field recordings and an occasional guitar bump, which may occur only three times. There are also some static crackles here and there. I am not sure what this all is about, really. Is it very conceptual in some way? Is there a score that tells these musicians what to do? Or is it all about field recordings in the end? That's the sort of thing I was wondering about, really. I quite liked the second piece, but didn't care for the first that much. Oh well.
- Frans De Waard -

Word(s):
The Watchful Ear
So my thoroughly productive day was soundtracked by all kinds of music, but this evening i have been playing a CD by a musician named Thomas Peter, a release on the Theme Park label named Circular. I knew nothing about Peter before this release, and having listened to it, and done some googling I remain thoroughly ignorant about his activities. He is credited here as playing “feedback system, drums and objects” but what isn’t entirely clear to me is what the feedback system consists of, or at least through what mechanisms it is channeled so as to make the music contained here on the CD.

Circular is a simple, delicate release that mostly consists of thin, wavering slithers of feedback that sound very much like the saxophone feedback output of Graham Halliwell or John Butcher. These lines of sound slip and slide over each other to create a soft, amorphous music not all that dissimilar to the more ambient tracks on Toshi Nakamura’s recent Egrets solo album. The feedback is joined here and there throughout the ten tracks on the disc by other sounds, rubbed drum heads, small knocks and rattles etc, but these are kept to a minimum, so increasing their impact alongside the feedback loops when they appear.

Circular is a little frustrating as there is a lot here that suggests a really strong album could have been made, and in places the disc really shines, but a tendency to allow things to slip into a slightly too easy ambience drags it down here and there for me. The feedback clouds float in and out of view regularly, so any form of continuous drone is avoided. Sometimes the streams of tone just wobble about in a relatively ’safe’ area, but on occasion they spill over into more fierce screeches, or combine with the minimal other sounds to break up the prettiness, and to be fair this happens often and to great effect, but on a few occasions things are left to congeal a little.

The best track here by some way is also the last and longest. Track 10 clocks in at a fraction over ten minutes, and while it contains the same drifting cumulus of billowing feedback there is also a continuous grey background to the track. I think maybe a window had been left open as the piece was recorded, so a featureless, low key murmur can be heard throughout, accompanied occasionally by small percussive sounds and almost clockwork-like scrapes and rubbing, all very muted and hidden under the cloak of the foreground feedback twines. A thoroughly charming track, this last piece points towards the strengths of this album- a sense of subtle understatement wrapped up in the thin blankets of sound thrown over it all. If this last track works well because of its delicacy, elsewhere I might have preferred a little more grit thrown into proceedings, a few extra barbs added here and there to keep the music away from candy-floss territory. As it is, there is a lot of promise in this album, a decent display of skill and control of what is a difficult and unpredictable area of music-making. I just think I’d have preferred a little more edge to the music and/or some more variety in the approach. Still, Thomas Peter is a name I didn’t know before but will now keep an ear open for. I’d be very interested to hear him play in a collaborative setting as well as I suspect his sound would be the perfect foil for a good number of other instrumentation.
- Richard Pinnell - 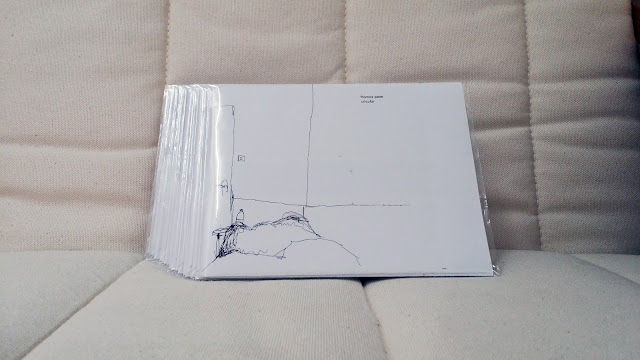 It is a 21'34'' piece called 0.10 in reference to the exposition held in Petrograd in 1915 while Kazimir Malevitch was taking the step from Futurist to Suprematist painting, abandoning the Cubic analysis of figures for a radical abstraction of pure forms and colours... (more line note included with the album)

Review(s):
Vital Weekly
0.10 is a reference to Malevitch - Skrobek's interest is in the opposition between popular / folk and high art, and uses such things as acoustic guitar, balloons, electric heater, radio, digital metronome & 220 hz sine wave. It very much resembles the supermatist blocks and shapes with its distinctive abstractions and structures, the early and not the latter which like most of modernism ends in some religio/mystical blankness, a theo-ontology unlike the nihilist ontology of noise itself. Never the less this work deserves attention, an abstract yet aesthetic composition in its own right. Though one could take issue with the idea of a differentiation between high and low/folk art in the post-modern, which we are either located in or have past. The barriers between the two in fact were well under dissolution in the Victorian era where the new bourgeois classes wanted art they could understand, through to the pedaling of impressionism to the Americans and the reciprocity of sending Jazz back across the Atlantic to infiltrate the avant garde. There are problems generated by what Skrobek explores, of elitism and fascism , but its a process which has been explored and intellectualised until nothing is left but dried an bleached bones, perhaps we should make a music with these?
- Jliat -

Theme Park is another branch of Herbal, a CDR label allow artist/ musician to have their creative freedom and open up for playful ideas.

Run in edition of 50 - 80 copies, selling by hand and online.
The label currently based in Kuala Lumpur, Malaysia.